On 19th May 2018, the day of the Royal Wedding and the FA-Cup final, there was a lot going on in the UK. As a Chelsea fan, I wonder if there could be a better feeling than watching the FA Cup final at Wembley against Manchester United?! But, instead, a small group of Drupal users gathered together in Edinburgh for DrupalCamp Scotland. I was invited to attend and chosen to speak about Drupal migration, rather than going to Wembley... I can confirm that it was an excellent decision and I had a great time there! 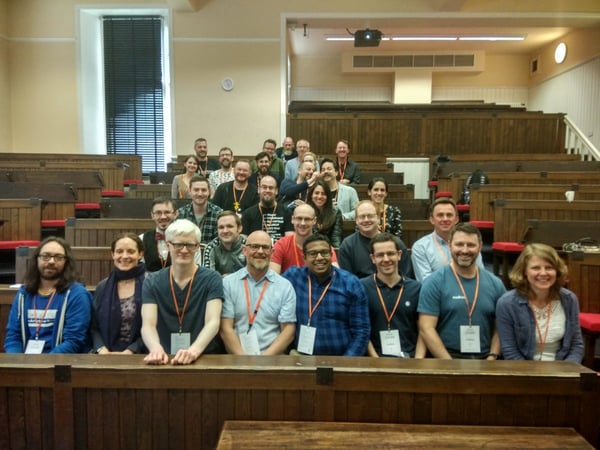 Most of the attendees at DrupalCamp Scotland

DrupalCamp Scotland kick-started with a welcome speech from Jennifer Milne, Deputy CIO of the University of Edinburgh. She spoke a bit about the history of the university, and I was amazed to learn that it is the sixth oldest university in the UK! It was very nice to see the Deputy CIO and Director of the University of Edinburgh so excited and happy to support the Open source Technology Community, including Drupal.

After that, Billy Wardrop did a quick presentation about Drupal Europe. He explained the event details and how you can get involved. More importantly, he noted how vital the event is for Drupal users in Europe. Why? Because, it is more than a technical conference; Europe's largest Drupal event in 2018 will be a festival that promotes real feeling between people who have the opportunity to meet each other and to have a great time together. Drupal Europe will introduce additional dimensions including summits for industry verticals, workshops, and a broad set of session tracks, including Back-end development, Front-end, Design/UX, Site Building, Project Management.

The first talk at DrupalCamp Scotland was given by Jeffrey A. "JAM" McGuire, from Open Strategy Partners. He was speaking about how we can do ‘Authentic Communication’ in business and how this maps to how we should can be more purposeful and generate greater impact in our Drupal contributions.

The essential components of authentic communication

He was also telling us how “Empathy” and “Context” have to work together in business communications: 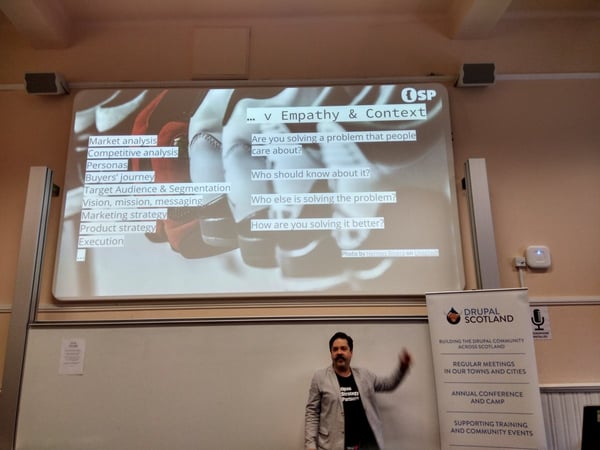 The importance of Empathy and Context

Finally “JAM” talked about how to plan your own Contribution narrative. He explained that your “Contribution Narrative” must encapsulate the following: 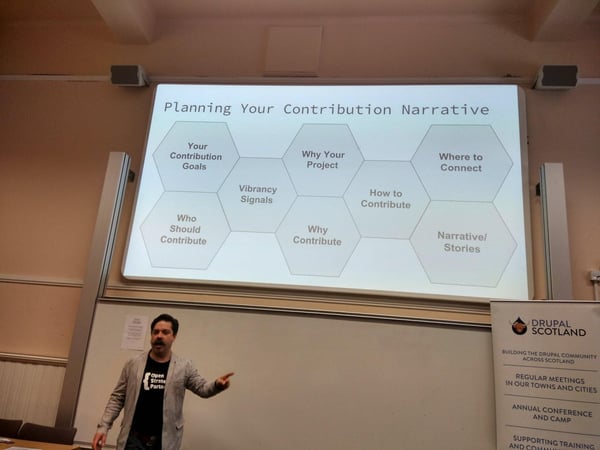 “Once you know and have mapped out all of this, you can weave it into all your comms and hopefully attract new contributors.” Jeffrey A. ‘Jam’ McGuire


The second session was from Julia Pradel and Christian Fritsch from Thunder CMS Team. They talked about the feature provided by Thunder CMS as a Drupal distribution, explaining who is using this feature globally and how useful it is for media and publishing products. Then they talked about the SharpEye theme testing tool, which they have also introduced to Drupal. SharpEye a visual regression tool that takes screenshots and compares them in automated tests. We open sourced the tool and you can download it here. 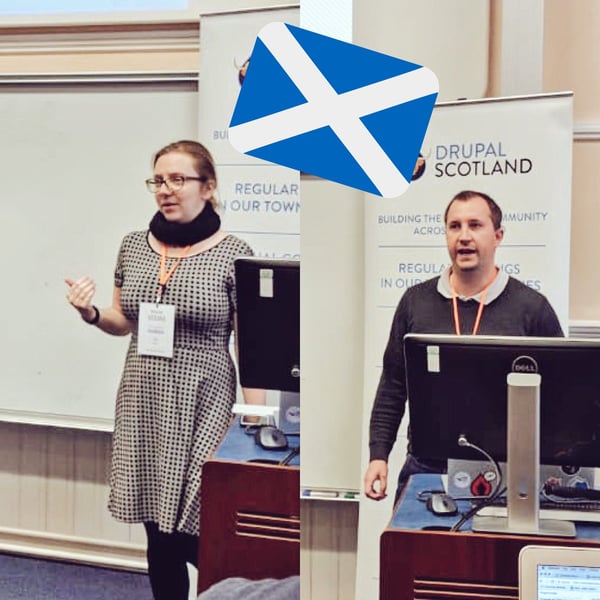 The third talk was given by me! I was talking about migration API in Drupal 8, specifically: How to migrate data from a csv file and what is gained by migrating everything into Drupal. I have begun writing a blog series on the same theme, if you would like to find out more.

After my speech, we had a great lunch and enjoyed the surprising beauty of the Scottish summer. 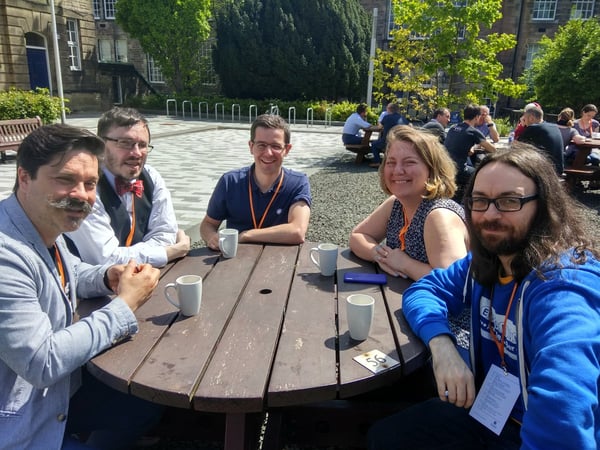 Networking over lunch in the Scottish Sunshine

After Lunch, the fourth session of the day was taken by Audra Martin Merrick. As the former VP Strategy & Operations for The Economist, Audra was talking about Content and Community, or Content and its Audience. She explained how to use social media efficiently, to connect the right content with the right audience. 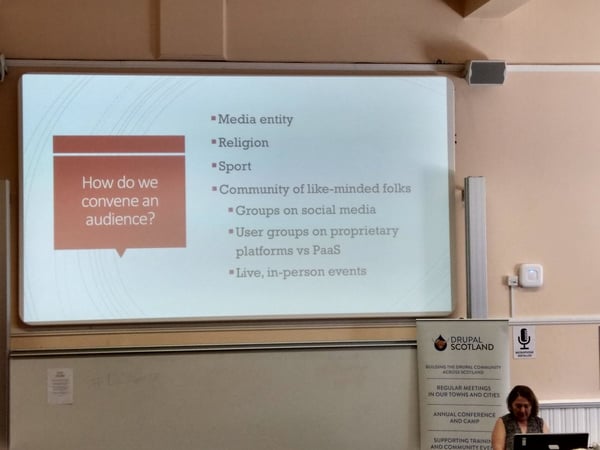 How do we convene an audience?

The fifth talk of the session came from Alice G Herbison. She talked about challenges identified from her own experience, as well as the edge case scenarios to be mindful of when conducting User Research. Her advice: she explained how to use tree testing for user experience and why it is important. 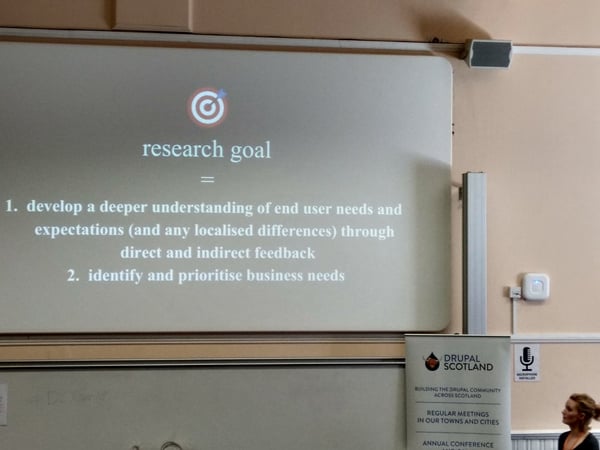 The importance of User Research

We had quick coffee break and got back to the sixth session of the day, which was taken by Martin Fraser. He was talking all about css: examples of people writing bad css, advice on how they can write good css, and how css can promote user interactivity, instead of using Javascript.

The seventh and final session of the day came from Paul Linney. He was talking about Voyage to Drupal 8. As he is currently working on some sizeable government projects, he discussed the problems he faced with Drupal 7 features and custom module, and how they improved the performance when they changed custom module with object-oriented programming. To support his important projects, he is looking into Drupal 8 instead. 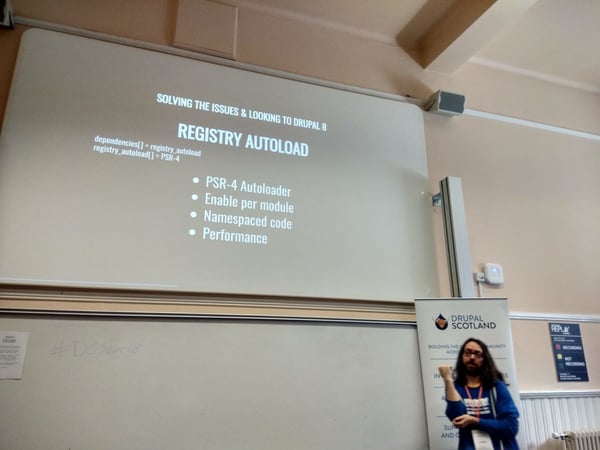 The closing note was delivered by Duncan Davidson. He was one of the main organisers who made DrupalCamp Scotland possible.

I really enjoyed my time at DrupalCamp Scotland and would like to give special thanks to Billy, Duncan and all of the other organisers. Huge thanks to University of Edinburgh and Makkaru for sponsoring the event and great thanks to the attendees also. On a personal note, I thank Paul Johnson and CTI for supporting me to go there and speak.

If you would like to learn more about my insights into Drupal 8 migrations, follow my blog series.